The Office for National Statistics (ONS) published their latest findings on the shortage of UK HGV drivers on the 19th of October 2021.

Whilst the headline figures show a total shortage of well over 100,000 HGV drivers in the UK, the last four years has shown a startling plunge of 17% of total drivers or an amazing 53,000 shortage.

In truth, the shortage of HGV drivers was starting to become an issue over four years ago, with poor working conditions and less that satisfactory salaries discouraged younger drivers from entering the industry.

This, on top of an onerous process of passing the necessary driving tests and (for those that need it) ensuring you have an operator’s licence or O licence as it is often referred to within the industry.

The issue has been exasperated by both Brexit and returning EU based HGV drivers and also Covid-19 severely slowing down the HGV drivers test dates and speed of Operators Licence. 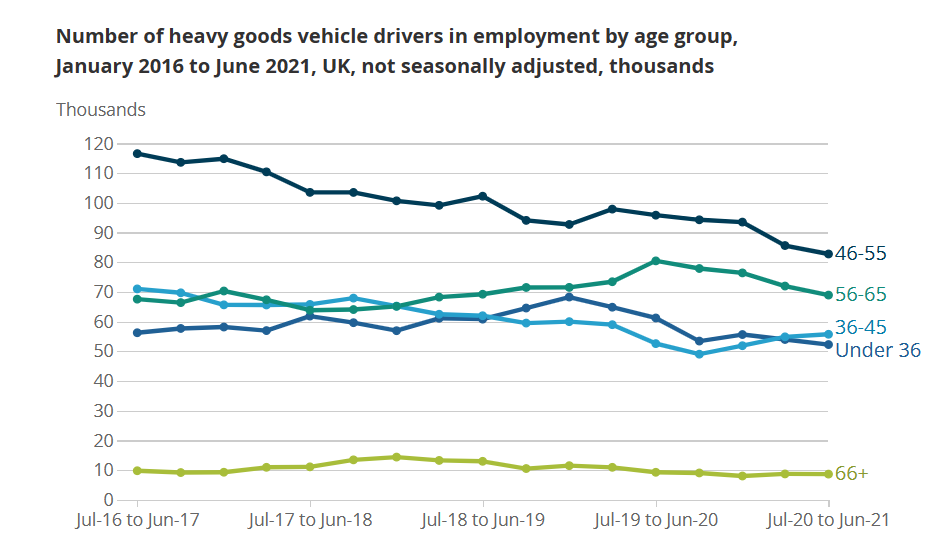 Much (not all) of the shortage of caused by middle aged HGV drivers leaving the industry, disillusioned by low pay, poor working conditions, long hours away from home and therefore choosing to change career.

Whilst the drop in HGV drivers was more pronounced between the age ranged of 36-65, the number of younger HGV drivers has also fallen. Between 2018-2019, the number of HGV drivers aged below 35 years had generally bee increasing and reached a peak of more than 68,000 in the year ending 2019, before decreasing again.

The UK Government will be hoping its latest measures are enough to halt this alarming slide, especially with internet based shopping continuing to boom, creating a perfect storm for UK Haulage and distribution.